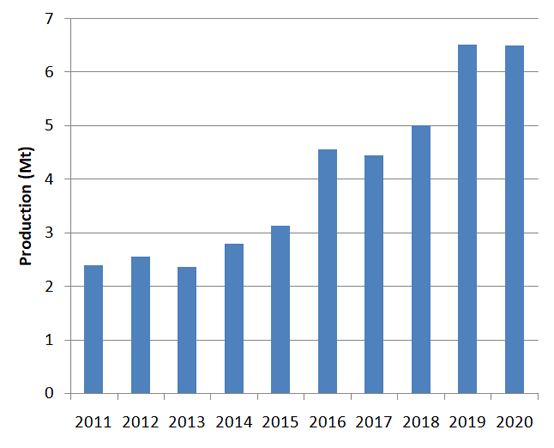 Interesting action from HeidelbergCement this week with the announcement of its agreement to purchase a cement plant in Tanzania. The multinational producer based in Germany has signed an agreement to buy a 68% stake in Tanga Cement from AfriSam, based in South Africa. There has been no price indication, but the deal will give HeidelbergCement an integrated 1.3 Mt / year plant in the north of the country as well as a limestone quarry with reserves for 30 years. The transaction is expected to close in the second quarter of 2022. HeidelbergCement says it hopes to buy the remaining shares of the company then.

HeidelbergCement already operates an integrated factory in Tanzania, the Wazo Hill factory of Tanzania Portland Cement (TPC) in the capital Dar es Salaam. It took control of the factory in the early 2000s when its subsidiary Scancem International bought more than half of the company’s shares. The plant commissioned a new cement mill in 2014 to increase its production capacity to 2 Mt / year. Local press reported in April 2021 that the subsidiary planned to invest $ 15 million in upgrading the unit in 2021. It sells cement under the Twiga brand.

Tanga Cement operates a factory near Tanga which was originally commissioned in 1980. Holcim took it over in the mid-1990s before South Africa-based AfriSam took over early control. from 2010. The plant commissioned a second production line in 2016 and has a production capacity of 1.3 Mt / year. It sells cement under the Simba brand.

HeidelbergCement’s decision to buy a plant in Tanzania is remarkable as it goes against the general trend of acquisitions by Western cement multinationals in recent years. Instead of pulling out of developing economy markets and doubling down on “safe havens” in mature markets, it bought a factory in a developing country. Although it could be argued that this fits the definition of a well-chosen targeted acquisition.

As shown in Figure 1 above, cement production in Tanzania has more than doubled over the past decade, from 2.4 Mt in 2011 to 6.5 Mt in 2020. Tanzania Portland Cement estimated demand local to 5.9 Mt, including exports, in 2020. total cement production capacity, integrated factories and grinding plants, 11 Mt / year. In addition to the TPC and Tanga Cement factories mentioned above, Holcim operates an integrated factory in Mbeya and Huaxin Cement operates one near Tanga. At the same time, new integrated factories have opened, notably the Kimbiji plant at Lake Cement of 0.5 Mt / year in 2014 and the 3 Mt / year Mtwara plant of Dangote Cement in 2015. The major project in the horizon is an integrated 7 Mt / yr plant proposal from Chinese company CNBM / Sinoma, although not much has been heard of publicly since mid-2020. At that time, the local press reported that compensation was being finalized for residents of the proposed site near Tanga. Needless to say, given the size of the plant relative to the Tanzanian cement market, a large portion of the plant’s output is destined for export.

Thinking of the CNBM plant, it should be noted that HeidelbergCement has committed to purchase an additional plant in the country. Production has increased over the past decade to likely meet demand, but the new Chinese project could potentially wipe out all existing production. Tanzania faced a cement shortage in late 2020 despite the coronavirus. TPC has repeatedly warned against production overcapacity in Tanzania and the challenges of competition. Yet it recorded a new sales record in 2020 and a 7% growth in the national cement market. Despite an overcapacity of 5Mt, TPC claims to have succeeded in adapting to the new market conditions. It also managed to increase its operating profit by 20% year-on-year to around US $ 46 million in 2020 compared to HeidelbergCement Group’s 8% increase in current operating results in 2020. This type of return no doubt helped HeidelbergCement catch up. disturbs.