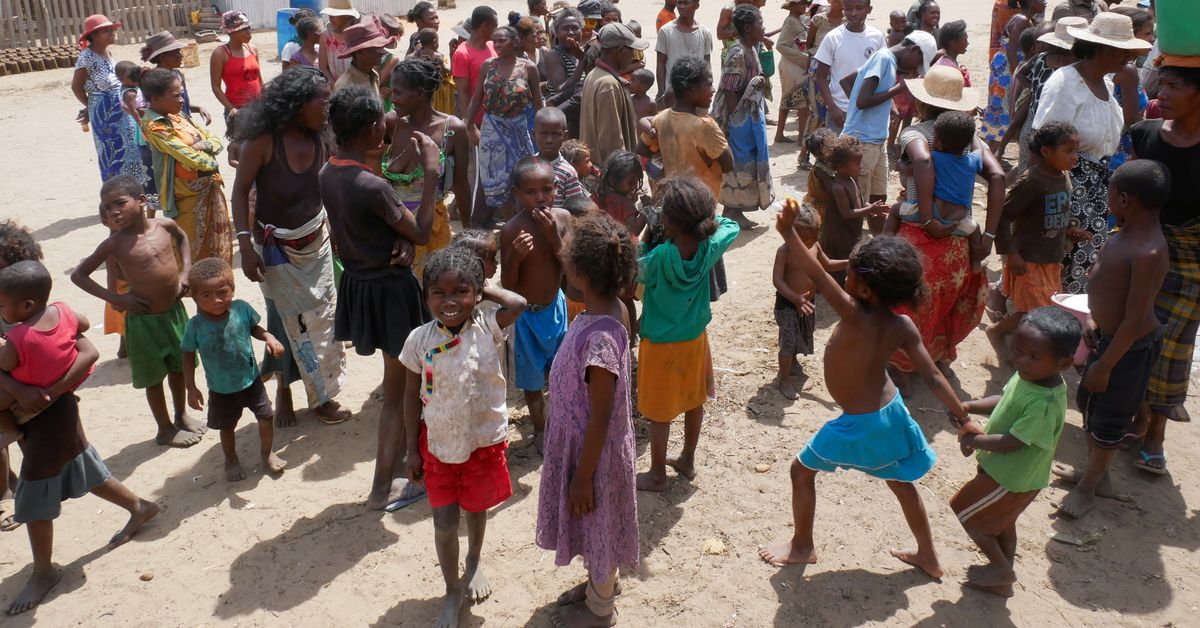 AMBOASARY SUD, Madagascar, October 11 (Reuters) – Some days all Tsimamorekm Aly eats is sugar water. He is happy if there is a handful of rice. But with six young children and a dependent wife, he often does without.

This is the fourth year that drought has ravaged Aly’s house in southern Madagascar. Today, more than one million people, or two out of five inhabitants, in his region of the Great South are in need of emergency food aid in what the United Nations calls a “famine linked to climate change”.

“In previous years it was raining, a lot of rain. I grew sweet potatoes and I had a lot of money … I even got married because I was rich,” said Aly, 44.

“Things have changed,” he said, standing on an expanse of ocher earth where the only green to see are tall spiky cacti.

Climate change is hitting the Indian Ocean island and several UN agencies have warned in recent months of a “climate change famine” here.

“The situation in the south of the country is really worrying,” said Alice Rahmoun, spokesperson for the United Nations World Food Program in Madagascar. “I have visited several districts … and heard from families how climate change has caused them to go hungry.”

Rainfall patterns in Madagascar are increasingly erratic – they have been below average for nearly six years, researchers at the University of California at Santa Barbara said.

“In some villages the last real rain was three years ago, in others it was eight or even 10 years ago,” Rahmoun said. “The fields are bare, the seeds do not germinate and there is no food.”

Malagasy climate refugees are seen in the camp located in Ambovombe, capital of the Androy region in southern Madagascar, September 29, 2021. REUTERS / Joel Kouam

Temperatures in southern Africa are rising at double the global rate, according to the Intergovernmental Panel on Climate Change. Cyclones, already more frequent in Madagascar than in any other African country, are likely to become stronger and stronger as the earth warms, according to the US government.

Conflict has been a central cause of famine and hunger in countries like Ethiopia, South Sudan, Somalia and Yemen, when fighting prevented people from moving to find food. But Madagascar is at peace.

“Climate change is impacting and greatly accentuating famine in Madagascar,” President Andry Rajoelina said during a visit to the worst affected areas earlier this month. “Madagascar is a victim of climate change.”

The country produces less than 0.01% of global carbon dioxide emissions, according to the World Carbon Project.

Half a million children are expected to suffer from acute malnutrition in southern Madagascar, 110,000 of them severely, according to the United Nations Children’s Fund, causing developmental delays, disease and death.