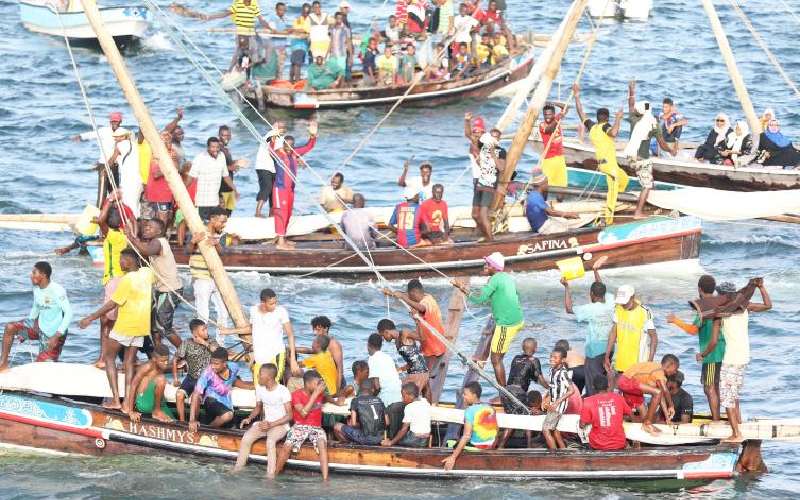 This week, Lamu was at the center of the activity during the Maulid Festival as the action returned to the archipelago after 18 months of silence.

The archipelago has billed itself as an island of festivals in the recent past, and on Thursday, local and international tourists flocked to the island for the culmination of the four-day Maulid festival.

Security chiefs and county officials have estimated that more than 6,000 people have arrived on the island for the 132nd edition of the festival celebrating the birth of the Prophet Muhammad.

Hoteliers and other traders reported booming activity at the festivals that kicked off Tuesday this week.

Maulid or Mawlid is usually commemorated on the 12th of Rabil Awal, the third month of the Islamic calendar.

The celebrations were organized by the Riyadha Mosque and Islamic Center committee, said Sheikh Muhdhar Khitamy, a mosque official.

“Maulid is highly regarded and takes place every year during the third Islamic lunar month of Rabil Awal. Month-long celebrations are observed around the world to celebrate the birth of the Prophet Muhammad, ”Khitamy said.

The festival is a religious event and involves nightly prayers, usually held around the Riyadha Mosque.

Other activities include memorizing the Quran and Islamic forums.

Friday afternoon saw a procession of Muslim worshipers singing and beating drums in praise of the Prophet.

Since Tuesday, there have been cultural, sporting and athletic events sponsored by the Kenya Ports Authority and Unesco.

These types of events were virtually absent over the past year, as health measures coupled with the government’s veto against mass gatherings put an end to the festivals that are typically the life of Lamu’s tourism sector.

“The importance of the Maulid festival cannot be denied, especially since it is the first major festival leading up to the Lamu Cultural Festival, which makes Lamu a popular tourist destination,” said Ali Bunu, hotelier and owner of the Sunsail hotel.

The festival is marked each year by a section of Muslims in remembrance of the birth of the Prophet Muhammad in the holy city of Mecca in 570 AD.

It is marked every three months of the Islamic calendar and in Lamu it is usually marked in principle at the famous Riyadha Mosque.

“The Covid-19 pandemic has indeed had an impact on this year’s festival with a significantly lower number compared to previous years, where we normally number up to 30,000 people,” said the general secretary of the mosque. Riyadha and the Islamic Center, Abubakar Mohammed Badawy.

It should be noted that in addition to the festival marking the birth of the Prophet Muhammad, it featured various aspects of Lamu, including traditional dances from various fields such as Goma la Pate, Siyu, Matondoni and Uta, recitations of Shairi, the Islamic calligraphy competition and Maulidi processions.

Donkey and dhow races are also key events of any festival in Lamu.

Street vendors interviewed said business picked up towards the end of the festival, with the first two days boring compared to previous years, where the four-day event was always marked by pomp.

“The Covid-19 pandemic has affected many local tourists, many of whom have been reluctant to come this year due to financial constraints,” said Amina Ndungu, owner of a food stall.

She said that much more intervention from the county government is needed to enable Lamu to enjoy festivals more thanks to the influx of tourists.

“The county government needs to invest more in promoting Lamu as a favorable destination with an emphasis on promoting the county as the festival island for which we are known,” said the Speaker of the House of Commons. Lamu trade, Ikhwan Omar.

These sentiments were echoed by the vice president of Lamu Tourism Association, Fridah Njogu, who said that the Maulid festival presents an opportunity for the resumption of tourism.

Lamu Tourism Director Josphat Musembi said the county government has already taken steps to ensure that Lamu Old Town is clean and that Lamu Municipality staff are working tirelessly to make the festival. a success.

“The first public Maulid celebrations took place in Egypt, some 400 years after the Prophet’s death in the eighth century. The celebrations then spread to Mecca in the Kingdom of Saudi Arabia and to many other countries, including Kenya, ”Khitamy said.

The late Sheikh Habib Swaleh, an Islamic scholar and man of traditional medicine from the Comoros Islands, initiated the East African version of the Maulid in Lamu in the 19th century, according to Khitamy.

“He also founded the Riyadha Mosque which has become a vital Islamic religious center, which annually attracts hundreds of followers from the region and the world,” Khitamy said.