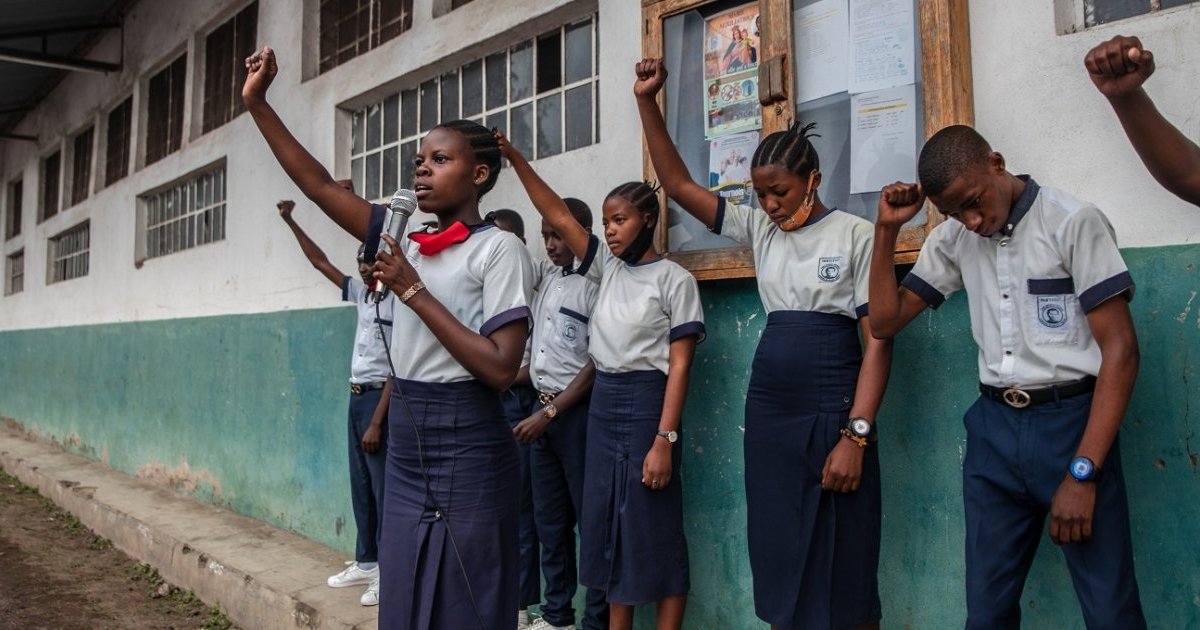 One July morning at Sainte-Ursule high school in Goma, eastern Democratic Republic of the Congo, students participating in an outdoor slam poetry show recite texts calling for gender equality and social justice , child protection and human dignity. They were introduced to this poetic and oratory art by the Goma Slam Session collective.

“In Africa, we are taught not to criticize the boss, we do not say no to our father, we do not claim our rights, we are told that women belong to the kitchen and that school is for men. As artists, we use slam to assert our rights, to break taboos and prejudices, ”explains Ben Kamuntu, member of the group which has up to 90 participants.

It was in 2017 that Kamuntu and his friends founded this collective to offer a place of expression and exchange through slam poetry, sometimes recited against a musical background. The country was in the midst of a period of transition, with former Congolese President Joseph Kabila clinging to power as his term came to an end.

“We made a wish for our country for the coming year: a wish for justice, for a democratic Congo where a president can step down and give way to someone else in accordance with the constitution. Then we did a slam piece of poetry together, each one making a wish, ”recalls the young man.

It is in a lively district of Goma that the group offers a meeting place designed to promote free thought. Rehearsals and slam sessions take place there every Saturday, allowing participants to share texts, critique and correct each other’s work.

“There were poets in Goma, but they were poets without a platform to bring them together and provide them with a framework to express themselves. Our slam sessions give everyone the opportunity to express themselves. There is no boss and no uniformity here. We advocate plurality, strength in numbers, ”explains Depaul Bakulu, member of the collective. “The more of us who defend the same cause, the more our voice is heard. “

Activism in Bujumbura and Antananarivo

In Africa, poetry competitions around the fire were once part of the oral tradition. They bear a striking resemblance to those that have emerged in the West in recent years. Modern slam is considered the poetic form of the 21st century. It appeared in the United States in the 1980s and began to develop in France in the 1990s. Between public speaking competitions and improvisation, the art of storytelling has been kept alive and sublimated by the mixture of tradition and modernity.

In DR Congo, Madagascar or Burundi, it plays a crucial role in the daily life of people and seduces almost everyone on public stages across the continent.

It was around the year 2000 that modern slam began to flourish in the Congolese capital, Kinshasa. Many slammers have emerged whose texts are often politically engaged, dealing with political issues and the humanitarian crisis in the east of the country, as well as more personal and poetic texts.

In Bujumbura, the capital of Burundi, whether parents and children, or students and teachers, it is an art that resonates with all those who listen to it. “As artists, we do our best to tell the daily life of Burundians through a variety of themes,” explains Junior Adasopo, member of the Burundian slam poetry collective Jewe Slam.

“Slam poetry is more than an art form for me, it is a channel of free expression and a way of life,” insists Kerry Gladys Ntirampeba, another member of the group.

In eastern DR Congo, the Goma Slam Session collective organizes a public event every last Friday of the month. During one of them, the participants called for the dignity of the prisoners and the recognition of the victims of the massacres in Beni, North Kivu. Most of the performers are young activists who dream of a just world with less social inequality.

For 21-year-old Feza Eliane, slamming is the ultimate way to denounce and deal with injustices. And it changed her life: “I have no other valid way to defend human rights. More than a passion for me, it has become my daily life. And since my life is a fight, slamming is my ultimate driving force, ”she said. Equal times.

In Antananarivo, in the heart of Madagascar, the slam poetry artist Caylah has already made a name for himself with his slamming style. Crowned national “Champion of Champions” of slam poetry in 2014, she invented what she calls “slam therapy” to treat ailments through speech. Famous for her Madagascar play, released in 2016, she expresses her feelings on her island, a country plagued by political and economic instability since colonial times.

“Madagascar is my first text in Malagasy. I had written mainly in French until then. And it took me a long time. It is a call from the heart, a message to politicians. In short, this is the opinion of an ordinary Malagasy citizen, ”she explains. Through her work, the 26-year-old seeks to encourage women, and in particular young girls, to speak out and defend their rights. “The slam saved me and I would like to do the same for others. I have no money. My talent is my only way to restore hope, ”says Caylah.

Malala Adala (“Madly in love” in Malagasy) is an ode to all the women who have to fight and to those who suffer from domestic violence and received ideas that plague Malagasy society. “When I was younger, I was abused at school, which also prompted me to write what I felt in my diary,” she says. “I was six years old and I was looking for peace and quiet. And because I love philosophy, I found it to have a certain poetry, ”says Razanadranto (Caylah’s real name) of how she came to embrace slam poetry.

Since 2019, the Goma Slam Session has been introducing young people to public speaking, teaching them the rules of poetry and raising their awareness of gender, human rights, the environment, child protection and responsible citizenship. . Its Slam at School program is aimed at girls and boys aged 10 to 17. More than 18,000 young people from 18 schools in Goma benefit from it. The last workshops were organized with the support of the Italian NGO Volontariato Internazionale per lo Sviluppo (VIS – International Volunteering for Development).

“We consider it crucial to bring freedom of expression back to schools, to provide this opportunity for expression, because it is a necessity. It’s giving them something that the school system doesn’t offer, ”says Kamuntu.

Franck, a young student from the Zanner Institute in Goma, also participated in the workshops: “The program helped me develop my critical thinking, my freedom of thought and even my self-esteem.

Robin Businde, another young beneficiary of the Slam at school, confirms: “Now I am able to organize my texts well and I can write on all kinds of subjects. I am able to stand freely in front of people without fear. And what’s even more interesting is that I am able to develop my own flow.

Ben Kamuntu is also a member of the Lucha (Struggle for Change) movement. In March 2021, it comes out Bosembo (“Justice”, in Lingala), a hard-hitting slam piece of poetry calling for justice for crimes that have gone unpunished in the DRC for over 25 years. He is campaigning for the creation of an international criminal court for the DRC and has added his voice to that of the Congolese doctor Denis Mukwege, winner of the 2018 Nobel Peace Prize.

The words of Bosembo draw inspiration from the 2010 United Nations Human Rights Mapping Report, which documents years of war crimes and crimes against humanity, as well as potential acts of genocide in DR Congo.

“Bosembo is a slam which is linked to my own life, to my career, that of a young person of the generation of the 90s. It is the fruit of my frustration, of my revolt, of all the years of war that we have lived and let’s continue to live here in Kivu, ”he says. “Millions of Congolese have been killed since the 1990s. Bosembo relates to all the crimes that have been committed here. It is a contribution to the call for transitional justice as a pledge of peace in the Congo. Because impunity fuels cycles of violence.